The Dangers of Shallow Breathing 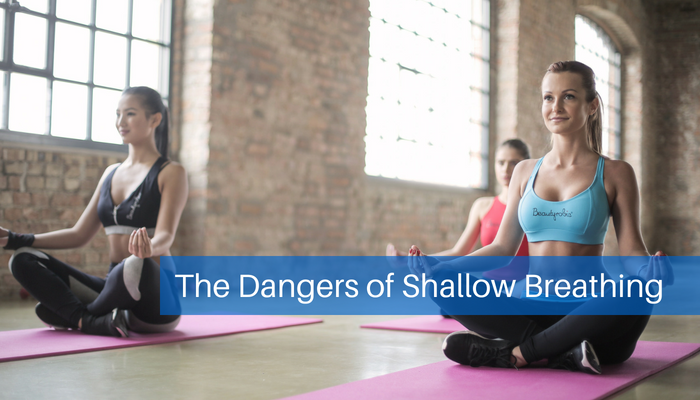 Correct breathing is underestimated, and over time, the (bad) habit poor breathing habits, combined with many hours spent hunched over a computer screen, the desire to have a trim midsection (sucking in the tummy) and the continual state of stress and hurry which many teenagers and adults experience, have all contributed to shallow breathing becoming the “norm.” It may not seem like a big deal, but you’re only filling a fraction of your lung capacity. Shallow breathing affects focus, cell metabolism, and many other functions in the body. Let’s investigate the problems with shallow breathing and how you can learn to breathe more deeply for better health through breathing exercises.

WHY DO WE BREATHE THIS WAY?

People don’t consciously think about breathing, and accept it simply as an unconscious activity, one which requires no training. Since the activity isn’t “life threatening”, many don’t understand its danger to good health. Since most adults have the misunderstanding that only carbon dioxide is exhaled, it seems sensible that any breath is a “good” breath.

When experiencing anxiety, people take rapid, shallow breaths. Even when NOT under stress, you can feel like you are hyperventilating, multiplying the succession of shallow breaths. This leads to stress, which causes shallow breathing, which increases stress, and so on, in a vicious cycle. The effect can snowball, creating tension which may lead to poor posture and exacerbating respiratory conditions like asthma and COPD.

THE BENEFITS OF DEEP BREATHING

HOW TO REDUCE SHALLOW BREATHING WITH RESPIRATORY EXERCISES

One of the first steps in learning to reduce shallow breathing is to recognize it. Just because you are born to breathe doesn’t mean you are trained to breathe effectively. To decipher the difference between shallow and deep breathing, try this exercise:

Once you have mastered the art of deep breathing, you are ready to Improve your respiratory system’s natural ability. A respiratory training device like the PowerLung can build upon the training you have already begun, improving your breathing efficiency and increasing your physical and athletic ability.  With the PowerLung, inspiratory and expiratory training are combined in one effective device. PowerLung is not simply for athletes, musicians, or those suffering from respiratory disease; it is for anyone who wants to experience the benefits of deep breathing with a well-trained, effective respiratory system.