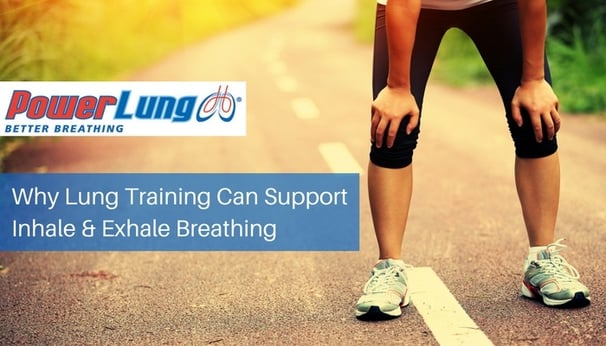 For many elite athletes, improving the respiratory system through lung training has become an important part of training for their specific sport. Additionally, those with a variety of chronic lung diseases (like asthma or COPD) understand the importance of respiratory strength, and may look for ways to increase their lung function. Studies have consistently proven that respiratory muscle training (RMT) has a resounding effect on breathing. For athletes in all different sports, comfort level is raised, endurance is increased, and breathing patterns are improved.

The diaphragm and intercostal muscles, located in the space between the ribs, combined with the neck muscles, form the inspiratory muscles, and together they cause the body to force air into the lungs, expanding the thoracic cavity. Inspiratory muscle strength is obtained by measuring the maximal pressure which can be generated while breathing in, using a training device. While difficult to measure, this peak inspiratory flow rate, correlates directly with muscle strength. IMT devices are designed with a weight (aka “load”) to breathe against, and include a set number of breaths to be taken while using a device during a training program of a set number of repetitions and length of time.

Adding expiratory resistance to a RMT program expands the number of respiratory muscles and activities which are involved in training. One fact often overlooked when investigating the breathing process is the importance of exhaling. There is more to breathing than just bringing IN oxygen; carbon dioxide waste must be discharged as well. The build-up of carbon dioxide is what really triggers your body to breathe, and NOT the lack of oxygen. Ridding the body of carbon dioxide relieves the breathlessness. This is one reason elite athletes (especially swimmers) do not hold their breath.

By adding expiratory to the standard inspiratory training, additional muscles are engaged and strengthen during the breathing process. Expiratory muscles are slightly different; although the diaphragm is involved like during inspiration, it is relaxing, and the internal intercostals depress the ribcage. When under severe stress as in strenuous exercise, the process is occurring so quickly that the muscles get no break and are firing simultaneously. Adding an exhalation aspect to RMT means that the body can deflate the lungs more completely.

Now that you understand the value of a combined RMT, the next step is to discover the types of resistance involved in respiratory training. As with other muscles, the respiratory muscles need something to increase strength, so resistance (like lifting weights) are needed.

Restrictive Resistance-based devices work on exhalation through varying diameters found in the device. By reducing the diameter, resistance is increased, requiring additional respiratory muscle force. However, there is no threshold within the device for the user to overcome, and users begin to reduce their force, making it ineffective.

Threshold Resistance-based devices combine both regular training and strengthening of muscles. Like weight lifting, once an athlete can handle a set amount easily, it is time to increase the resistance (add weights). Additionally, progressive threshold resistance allows air to flow both in and out at a set amount, and as the user gains strength, that amount can be adjusted. This provides for an individualized training program.

PowerLung is a patented threshold resistance device that promotes better breathing and muscle strength, with proven results. In a 2003 study at the University of Toronto Respiratory Research Group, inhalation muscle power was increased by more than 40% and exhalation muscle power was increased by over 150%. PowerLung provides a personalized program with additional resistance cells, which present a varied amount of adjustment since both the inhale and exhale resistance cells adjust independently of each other. This allows for a step up once the user has reached the threshold, and allows for a “step down” when returning to a training regimen after an extended off season or due to illness or injury.

Lung training is not just for athletes and those suffering from respiratory illness. Active individuals find themselves suffering from dyspnea (breathlessness) and simply, inefficient breathing. Respiratory muscle training increases aerobic enzymes and blood flow, improving both endurance and power when performed regularly. The respiratory muscles also strengthen in use throughout your specific athletic movements just like your other muscles, and help to maintain good posture and torso strength. Consider adding a respiratory training device like PowerLung to your everyday schedule.