How Healthy Eating Affects Your Breathing 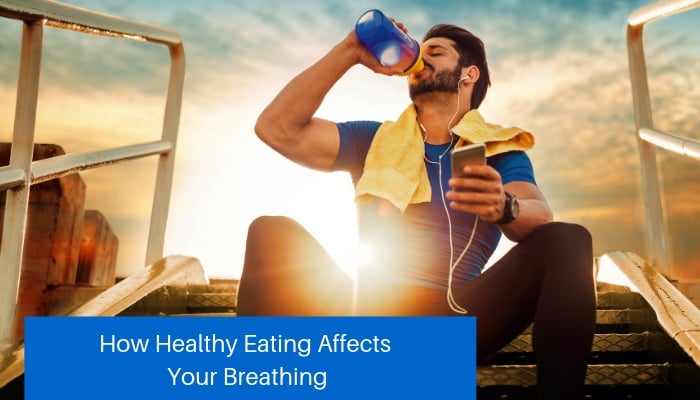 Science has shown us that our food choices have a lasting effect on our bodies, and we have begun to understand which foods are better—and worse—for a variety of physical needs. We have heard for many years the negative effects of POOR food choices on the body: weight gain, diabetes, heart disease, increased incidences of cancer and other illnesses, among many other ailments. But instead of focusing on poor food choices, lets investigate those foods which can support—or even improve—lung health.

The lungs are working 24 hours a day. They not only work tirelessly without a break, they also have to take in any number of pollutants found in our environment. Incidences of asthma COPD and other chronic lung conditions are at an all-time high. Any choices we can make to support them, to make them work more efficiently, and last a lifetime, should be embraced. That being said, there are foods which can improve your lungs. Let’s discover some good dietary choices for lung health:

We all know that “fresh is best”, but certain fruits and veggies are even better than we thought. For example, cruciferous vegetables like cabbage, cauliflower, broccoli and kale, are full of fiber and antioxidants, as well as sulfur. This aspect of vegetables like these adds to the smell but also has been proven to slow the progression of cancerous cells. A recent study showed both apples and tomatoes slowed the decline of lung function and fight lung diseases like COPD. Both have a lot of flavonoids which help open up airways.

Yet another study designed for lung disease sufferers confirmed benefits which can be adopted by anyone who wants to improve lung health, dietary fiber emerges as a new tool for anyone who breathes. An Australian study found that dietary fiber significantly helped asthma sufferers, and is now touted for its ability to prevent COPD, an acronym for a host of chronic respiratory diseases. It also prevents the body from ridding itself of allergens and triggers histamine production, increasing the symptoms of allergy and asthma.

Every cell in the body needs water, and your lungs are no different. In fact, water is truly critical to the efficiency of your lungs, as dehydration wreaks havoc on them. Dehydration can lead to mucus build up, which can invite bacteria in, increasing the risk of respiratory infections. Furthermore, for athletes, hydration can decrease performance significantly. Water is necessary for the creation of ATP, in a process called the Kreb’s cycle. This is how energy is created, so when it is not working effectively, stamina is reduced, and breathlessness is increased.

The ingredient which makes peppers spicy, Capsaicin, it also adept at thinning mucus and stimulating secretions. Peppers are also a great source of beta carotene, the antioxidant which gives vegetables red, orange, and yellow color, which has been proven to slow the decline of lung health in the elderly, as well as counteract the damage caused by smoking. .

For thousands of years, humans have experienced benefits to consuming garlic. With significant antibacterial and anti-inflammatory aids, it has already shown to be beneficial to fighting cancer. However, some recent studies have shown that eating raw garlic can significantly improve lung health, shown in a 40% reduction of lung cancer risk in smokers who consumed it.

Coffee has been the subject of possibly hundreds of studies, some of which are in favor of this universal drink, while others associate it with any number of maladies. But one thing we can all agree upon—the effects of caffeine as a stimulant on multiple functions of the body. Caffeine has been shown to improve lung function, thanks to its status as a methylxanthine, a known—albeit mild—bronchodilator. In moderate amounts, 3-5 cups, coffee is a mild stimulant for lung function. In large amounts, it still exhibits the same benefits, but they are coupled with headaches, dizziness, and nausea. So, keep your cup, or four, of Joe, but keep it at that.

There you have it; a list of food (and drinks) which help maintain, and even improve, lung health. You only have one set of lungs for life; treat them well and they will reward you for years—and activities—to come.