Firefighters, Don’t Burn Through Your Oxygen Too Soon 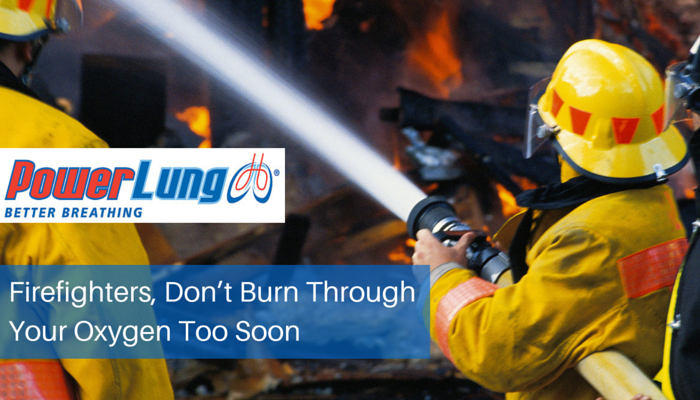 Firefighting is an incredibly dangerous profession.  We’d like to thank all firefighters for the dangers they put themselves in to protect the public.  We want to provide a way to make firefighting a little easier.

Firefighters have to perform at their maximum physical ability while in the flames, all while on an oxygen tank counting down the time they have breathable air.  This equipment weights a lot (45-75 pounds), adding physical stress to an already stressful environment.  In fact, a study looking at firefighters in the central US found smoking rates among firefighters was 13.6% and 17.4% for professional and volunteer firefighters respectively.  That is far higher than averages in other professions including military and police officers. When we perform at our maximum, our bodies need more oxygen.  For firefighters it’s all too important to increase your body’s oxygen efficiency.

Immediately Dangerous to Life and Health

Just as IDLH (Immediately Dangerous to Life and Health) suggests, the environment firefighters work in are extremely hazardous.  Your suit and mask are all that separate you from carbon monoxide and super heated gasses while working in weakened structures from the fire raging around.

Running out of oxygen is a common cause of death for firefighters.  We would all like to believe we can control our natural responses to situation, but we can’t.  Studies have shown that the common, automatic, reaction firefighters have when they have depleted, or nearly depleted, their oxygen supply is to pull off their mask (breathing in the toxic gasses), and run for what they believe is the nearest exit.  Sadly, many don’t make it, or even run in a direction that proved not to be an exit. Even pulling your mask off too near the fire can cause serious health conditions like asthma and COPD.

These were well-trained firefighters, but sometimes we simply cannot control our automatic reactions.  Avoid this happening by improving your oxygen intake to extend the life of your oxygen tank under pressure.

It might not seem immediately obvious, but scuba divers and firefighters have much in common.

A study by Barry University examined the oxygen intake of divers.  Specifically testing to see whether RMT (Respiratory Muscle Training) had any effect on improving their oxygen intake, thus extending the time they can stay on one tank of oxygen.  The study was double blind.  Some were given RMT devices with dual-direction resistance while others were given shams.

The results were clear.  The test group saw improvements in:

Common Concerns Between Divers and Firefighters

As might be expected, oxygen usage changes with your muscle mass.  People with less muscle mass simply have less tissue requiring oxygen and typically have smaller lungs and therefore less lung capacity in general.

Exertion effects oxygen consumption.  We consume more oxygen while moving than sitting, and when we exert ourselves we consume a lot more oxygen.  This can be changed with strength.  If two people did the same work, the one that is stronger will find the work less physically challenging and will not breathe as heavily as the weaker person.

Nerves effect oxygen consumption.  When you spend too much time fearful of your oxygen levels or think too much about the situation you are in you get anxious.  When anxious, we breathe with our chest and shoulders taking short, shallow breaths.  This is the quickest way to burn through your tank.

Of course scuba diving and firefighting are not the same thing, but they face many of the same challenges when it comes to their oxygen supply.  If we can learn anything from this study, it is that by training our lungs to breathe stronger, more efficiently, and in a controlled pattern we can reduce our oxygen consumption and extend time on oxygen tanks.  This could be the difference between a fatal accident and saving another life… and your own.

PowerLung is the only Respiratory Muscle Training (RMT) device that exercises your respiratory muscles through their full range of motion.  It improves your breathing so it is more efficient, easier to perform and reduces breathlessness.  That means lasting longer in IDLH.

To learn more, explore our site and discover all the benefits of PowerLung.