Cyclists, Find the Breath for the Last Stretch 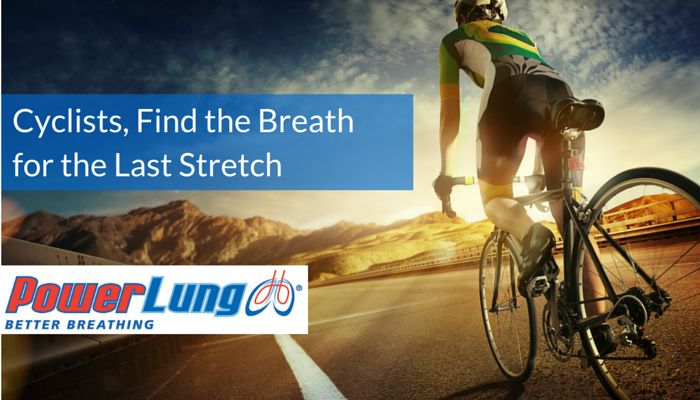 In a study published by G. Markov, et al, entitled, Respiratory Muscle Training [RMT] Increases Cycle Endurance without Affecting Cardiovascular Responses to Exercise, it was “concluded that the increased cycling endurance that is observed after RMT is not due to cardiovascular adaptations, and that the results provide evidence for the role of the respiratory system as an exercise-limiting factor.” What does this mean? It means that weak respiratory muscles can hold back your performance.

Studies have also found impressive improvements in respiratory muscle strength and endurance even in well-trained athletes (Sonetti et al. 2001).  This finding is important because it shows the potential for improved respiratory muscle function in individuals who engage in strenuous physical training regularly.

Independent studies have shown that the muscles of the respiratory system are the single and biggest limiting factor in cycling training and race performances.

How To Train These Muscles

Training specific to the respiratory muscles is accomplished independent of whole-body exercise and is usually undertaken in one of two ways.  In isocapnic hyperpnoea, the person breathes at an increased level of ventilation for a long time. This training method, similar to the breathing demands of endurance exercise, helps to develop the stamina of respiratory muscles. Threshold loading builds respiratory muscles strength by breathing for a shorter time against a resistance, similar to traditional weight training. By adjusting the settings, PowerLung can accomplish both methods.

Remember the study from earlier, while they noticed significant differences in endurance by just training the respiratory muscles in one direction (inhale or exhale) PowerLung trains in both directions providing a full respiratory system workout.

Increasing your oxygen supply through RMT results in more energy production for explosive breaking and sprinting from the peleton or when racing in the velo. Faster and easier pace-line speeds on the road and in velodrome team races can be attained. On the tour, climbers and respected mountain men have come to appreciate the endurance value of RMT on the climbs, in attempted blasts at the bottom of the wall and from the punishment of consecutive days of racing in the mountains.

Bonking is usually caused when weak or untrained respiratory muscles become fatigued, regardless of what type of bike you race. The warning signs of respiratory fatigue are:

Use PowerLung twice a day for 10 minutes to strengthen the muscles that support your breathing.  It’s that easy!