Living in Your Own Reality Show. Its Houston Marathon Time. 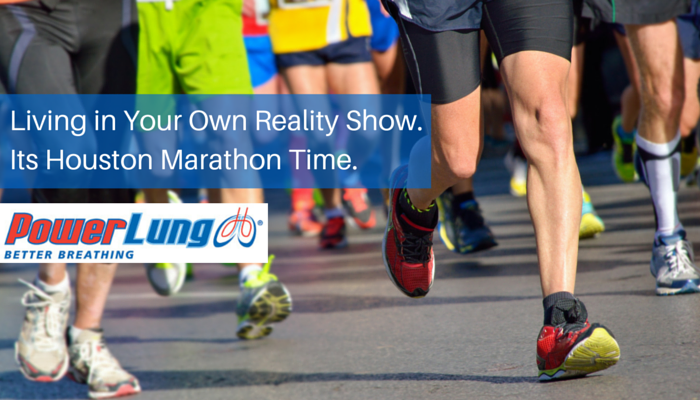 See yourself where you want to be and then be there.
Don’t be in the past.
Be there! Act like the person you want to become.
Bob Proctor – Speaker and Author

Houston, it’s that time of year again. MARATHON TIME!  I know because I volunteer for the Start Corridor Committee, and we had our meeting this coming weekend over 20,000 people will participate in the 5K, Half Marathon and Marathon. Houston’s Marathon has three great qualities: 1. it’s flat, 2.it’s fast and 3. it’s fun.  Even with the big 3F’s for marathon running, training for this run can be difficult.

Some of your longest runs and training occur during the Holiday season, but the time is well spent. Even a first time marathon runner can experience the satisfaction of making it through the run. The whole city gets behind the event for fun and safety. This year volunteers are being asked to take Hands-Only CPR training. Plus, we get GOLD stars for being Green. This Marathon is like seeing the culmination of last year’s and this year’s New Year’s resolutions all in one fulfilling occasion!

Everyone has a goal or a dream.  Do you have something you really want to accomplish?  When that goal or dream comes true, I call it Living your Own Reality Show.

Here is my story of running the Houston Marathon and achieving a goal shared by two of us:

I’ll admit I’m a little prejudiced in favor of the Houston Marathon, but not because PowerLung is based here.  While I lived in Dallas, I chose this run because the lay of the land was FLAT.

The 1993 Houston Marathon was my very first to run, and my coach was Barry Jarvis (my husband and co-inventor of PowerLung). Unfortunately, at the time, I didn’t have a PowerLung to assist my training. In Dallas, I had been using Bob Glover and Pete Schmit’s training for 5K and 10K runs. These regimens became my Marathon training. Regrettably, it wasn’t the Holidays that interfered but Barry’s illness. Shortly after qualifying for the Boston Marathon a couple of years earlier, Barry suffered a heart attack and hadn’t run seriously since. He developed a condition that required a second open heart surgery in the middle of December 1992.

Like most people, I let the training slide, but even from the hospital, he repeatedly urged me to keep to my training schedule…maintaining my goal and holding onto my vision for running the Marathon. He had me sit down and commit to my finish time. I said, “Before they take down the clock”, which that year was at 5 hours. I faced all the training runs, the fact that he was in the hospital, and I was actually still living in Dallas, so you can imagine the wealth of excuses I came up with for settling.

Within three weeks after being released from the hospital, he was driving around, and I was “running the course” to familiarize myself with it, particularly the last half where it is very challenging. My last practice race was the first Martin Luther King Day run in Houston. He rode his bicycle alongside me and coached me the whole race keeping me fighting.  Believe me there were some verbal exchanges! (I didn’t understand the bicycle riding beside me until we went to England, and I saw how the rowing coaches coach from the bank on bicycles.) I finished the run and said “Let’s just go.”  As I turned to escape, a woman ran up to me and said, “You can’t leave. You have to stay for the ceremony. You won your age group.”

What an amazing experience and what a feeling! Winning that award was only the beginning. I ran the Marathon and met my goal—my time was 4 hours 54 minutes and 6 seconds.  Do you ever forget the finish time for your first marathon? The thrill of hearing your name as you cross the finish line–in a word AWESOME! I’ve only worn my “Finisher” shirt once, but I still have it and the Finisher’s cup. I could have done it alone, but perhaps not… without Barry, all the people on the route, and friends who ran with me along the way.

A couple of years ago, I determined that I wanted to run “The Marathon” again. At 67, my friends thought I was nuts, but I remembered how good it felt to set a goal, see what the end result would be like, and train for it. Circumstances prevented me from running the Marathon that year.

But I will as soon as I envision passing the finish line again and imagine hearing my name over the loudspeaker. My reality show—my goal and dream—is called “Running the Houston Marathon”. Train well.  I’ve already started my PowerLung training, and that gives me an edge!

What is your dream or goal? In your reality show, what would you be doing? Please share your dream reality show with me. A vision in your mind or a picture shared is even more inspiring. The more people you tell about your goal, the more real it becomes to you.  To reach others, we can share your goals on Facebook and Twitter. If your Bucket List involves any kind of training, we’d like to know how you’ll be using your PowerLung to help you.

Let’s produce our reality shows together.